Allison Creek Presbyterian is a church which has adapted to our changing community.

We consist of new residents who commute to work, new retirees, as well as families who can trace long York County genealogies.

The Allison Creek Presbyterian Church was organized in 1854. The church served the rural community in the area and has always been known as a congregation involved in the community.

The church fell on hard times in 1904 after the Catawba River dam was completed.

Prime bottom farmland was flooded and several families were cut off from the church by the formation of Lake Wylie.

This was followed by an outbreak of malaria in 1918 which resulted in several families leaving the area. At that time worship attendance dwindled to a dozen.

In 1945, a tornado lifted the roof off the church. The original wood paneled sanctuary was the church’s only building from 1854 until 1953 when other additions were begun. 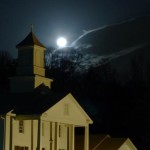 The current Family Life Center was built in 1984 and is used for many events including sports, bluegrass, preschool, and community events.

Renovations to the current sanctuary were completed in 2003. This includes additional space, carpeting, painting, new pews in the lower area, and refurbished pews in the balcony.

The sanctuary entrance was renovated in 2019 and includes a more welcoming and larger area which celebrates our history and looks forward to our future.